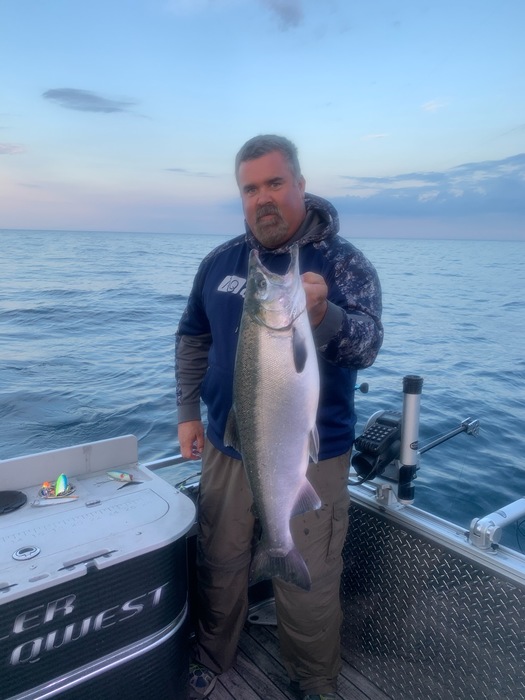 Perhaps it was Brad Dupuie’s passion for fishing that lured him from  being a design engineer for the automobile industry to developing new fishing pontoons for Angler Qwest.  His brother, Mark, was President of Qwest Pontoons and the two were seeing through R & D with that brand, how well their tritoons handled big water.

“I had owned several fishing boats but saw that the pontoons handled big water great and had much more room,” he said.  “Sure, there were a few manufacturers that made fishing versions of their pontoons, but they weren’t much more than a retro-fitted pleasure boat.  I want a pontoon that was designed for fishing, not the other way around.”

He knew they needed to be stable.  He knew they had to be sexy.  He knew that he wanted them to be at home on the water whether a person was trolling, jigging or whatever.

“It helped greatly that we could start with 3-D modeling,” he said.  “We could design the boat without having to manufacture a new one each time.  We also had the data from the Qwest Brand.  It was an invaluable combination.”

The pontoon had to have fishing features.  A center console ended up being the ticket for stability and helped to accommodate the huge fishing locators on today’s market. Giant livewells,  cavernous storage,  Binary wall systems, High Pressure Washdown; the new rigs had to be capable of those features and more to be the diehard fishing vessel Dupuie wanted.

“What we were in fact doing was creating an entirely new niche’ in the fishing industry,” he said.  “We were the first to market with a concept of a pontoons that were designed specifically to fish but also was big enough to have the entire family, and more, on board.”

Dupuie could have stopped at just making an  all-purpose fishing pontoon but didn’t.  Nope, to do it right- to do it JUST right, he knew he couldn’t stop there.

“We had to create models that were species-specific,” he said.  “Yes, our Family Fish Series could work for most anyone, but I wanted anglers who really had a favorite species to get exactly what they needed.  That’s why we have models for stripers, catfish, trolling, panfish and more.  When you purchase an Angler Qwest you pretty much are getting a custom boat designed just for you.”

The Lenz couple- were they pulled over because their Striper series was too cool?